What is a microchip and what it looks like?

The microchip implant is in the shape of a grain of rice with dimensions of 12mm x 2.1mm. It consists of a small chip randomly programmed with a 15 digit long number in accordance with ISO 11784. The number can be read by a special scanner. The chip is connected to the ferrite core and a capacitor which is wrapped around with a copper coil which plays a role of antenna. The microchip works through radio wave frequency. The whole is embedded in a biocompatible glass called Bioglass. 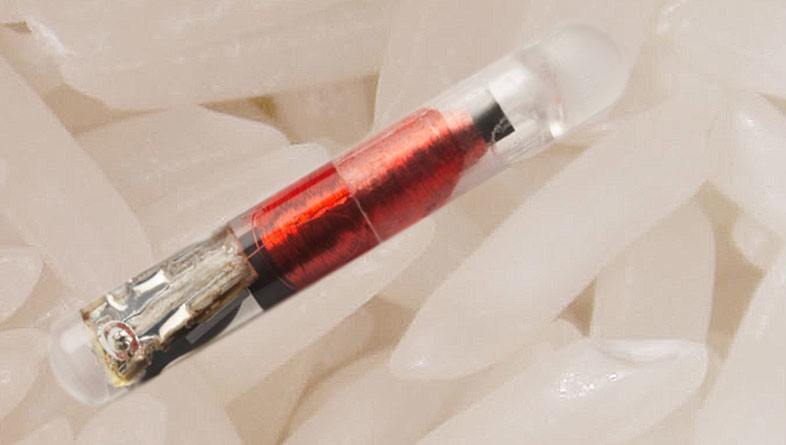 The biocompatible glass does not have the anti-migration characteristics. For the additional safety biocompatible glass is coated with protective substances for anti-migration and insulating properties and this is where the Parylene C coating comes. In addition to the great anti-migration properties of Parylene C coating it also protects the microchip from natural substances in the body, that may penetrate through micro-cracks caused by mechanical damages. The whole system that measures approximately 9mm x 1.5 mm is embedded in laser-sealed glass capsule, which corresponds to the size of a grain of rice, and measures 12mm x 2.1mm. 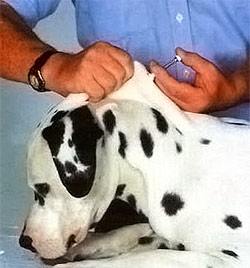 The microchip is a passive device and to be activated need the radio waves generated by a special reader. It is activated by radio signals sent by the reader. After processing by the microprocessor containing the radio wave, encoded microchip number is sent back to the scanner that decodes and displays it in the form of an identification number on the screen, the whole procedure takes less than 40 milliseconds.

The reading distance using a standard handheld reader is in the range of 5 cm to 10 cm and depends mainly on the size of the antenna. The most commonly used handheld readers, however, do not exceed 10 cm.

How long can the microchip last?

Due to the fact that the microprocessor does not require any power source replacement or battery change, it can be said that its smooth operation lasts for decades, and certainly much longer than the average animal life. You may need to get your dog microchipped when moving a pet to Australia. 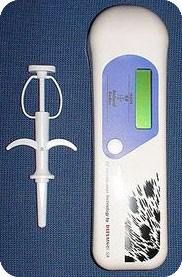 Implantation of the microprocessor is carried out with the needle resembling a normal injection needle but with a little larger diameter. The microchip is placed in the needle in a factory, and during the injection it is pulled out by a special piston of the syringe.

According to the World Small Animal Veterinary Association (WSAVA) and The Federation of European Companion Animal Veterinary Associations (FECAVA) there are allowed two places in the body of a cat or dog where the microchip can be implanted. The microchip is put under the skin on the back between the shoulder blades or under the skin in the middle of the neck to the left.

According to the experience of British and American doctors and those who have labelled hundreds of dogs and cats per year, the identification between the shoulder blades is much safer in comparison to the implant on the left side of the neck. It has  much lower risk of complications and much lower rate of the migration of the microchip in the first 3 weeks after implantation. In the United Kingdom, Ireland and the United States inserting the microchip on the neck is not allowed.

The implementation of the implant itself is usually painless and animal responds in the same manner as it was receiving a normal injection. The microprocessor is biocompatible and does not cause any allergic reactions. For the additional protection against the migration in the body, some manufacturers coat the microchips with polymer compounds that help to place the implant correctly and accelerate its anchoring in the tissues under the skin.

Dogs and cats are usually microchipped during their first vaccination. In the west breeders microchip pets between the 5th and 8th week of age. Of course, the identification can also be done later.

Who has the scanner to read a pet microchip?

The figures say that there are about ten thousands scanning devices in the UK, Ireland and Scotland.  These can be found at most local veterinary practices, Local Authorities and animal welfare groups. If a pet has been found and it had been microchipped it can be scanned for the number. The number itself is not enough to return a pet to its owner. The veterinary surgeon has to contact the national database centre to get your contact details. As you can see your data are stored in one place only and not everyone has the access to it.

Where you can get your pet microchipped?

Your pet can be microchipped at your local vet if not ask him where is the nearest please where it can be done.

How much does it cost to get a pet microchipped?

The cost of getting your pet microchipped ranges from £20 to £40 however you can try to get it for free as there are quite a few national schemes going on. You may want to have a look at the costs of moving a dog to Australia example.

Do you own a dog or a cat? You probably know that it is required by law that your pet wears a collar with a information plate attached to it with information letting others to identify your dog and return it to your when it has got lost. Unfortunately hundreds of cats and dogs still do not have such a facility. Luckily for our loved house animals the scientists have invented a microchip which was used for the first time in 1989 and since then it remains the best way of registering, marking and indentifying a dog or cat. Every pet that gets microchipped gets a unique number too. That number along with your contact details and the health history of the pet is entered to a national database. You do not have to worry about your personal information only police and vets have the access to it.